Vehicle Without Borders Hovercraft, one of the most intriguing ideas in transportation technology, are a potential contender for the role of future transportation.
Due to its ability to traverse both on land and in the sea, this extraordinary machine, which flies by gliding over the terrain it moves, may reach the farthest corners of the earth without recognizing any geographic boundaries.
Hovercraft operate on the premise that each airbag in the vehicle propels the vehicle forward.
The engines spew more air pressure than usual in the direction of the ground, disconnecting the car from the ground.
As a result, the car rises a little off the ground.
Propeller engines positioned perpendicular to the base give the vehicle forward motion in addition to vertical movement.
The rotation of these engines around their axes and the wings fixed to the back of the vehicle give the vehicle its maneuverability. 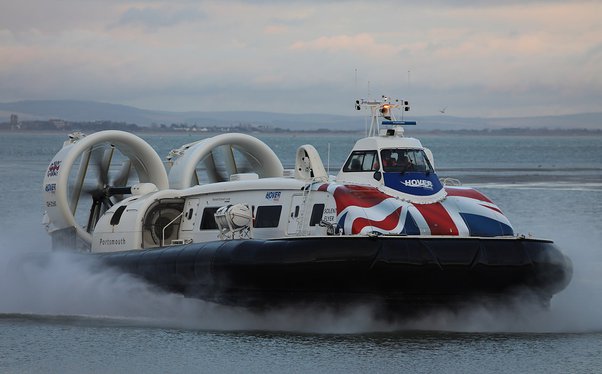 The airbag is maintained in place and air escape is stopped by a single elastic device known as a skirt that surrounds the bottom portion.
In the early 1800s, the Swedish physicist Emanuel Swendenborg helped to influence public perception of hovercraft.
Swendenborg had suggested that the single inverted boat may float provided enough compressed air was delivered to the bottom of the vessel.
But in terms of carrying out this mission, the technological level of his day was far behind.
British engineer Sir John Isaac Thornycraft conducted more comprehensive research in the 1870s.
It is well known that the British engineer tested the theory before patenting it.
Despite the fact that numerous scientists created numerous designs, none of them was sufficient to support the idea.
But in the 1950s, British inventor Christoper Cockerel overcame all design problems and produced the first successful prototypes.
Due to his accomplishment, Cockerel received the title “Sir,” and he also made it possible to produce the first functional hovercraft, known as the SR-N1, in 1959.
Hovercrafts have been made in a broad range of sizes over the years, from tiny single-seaters to the enormous SR-N4 travel hovercraft, as we can see today.
The SR-N4 is still one of the most popular vehicles for excursions between France and England after the 1970s since it can traverse the English Channel in a single swift motion.
This enormous truck can quickly achieve speeds of 90–100 kilometers per hour and can easily accommodate 450 passengers and 65 automobiles.
These vehicles, which are also employed in the military, play an important part in the naval forces of the majority of nations, particularly because they may be utilized for landing operations.
These vehicles were very useful during the Gulf War since they don’t touch the ground, making them immune to sea and land explosives.
The hovercraft’s greatest benefit is speed, and it doesn’t require any ports or roads.
It uses a lot less gasoline because it is not subject to friction force.
Fast hovercraft were envisioned as having use in the sea, desert, and ice in the early 1960s.
But the problems were soon identified; regular component deterioration brought on by sea water’s influence and driving challenges made this vehicle fall short of expectations.
However, it is obvious that this design will continue to be developed because of technological advancements.
Now that their shortcomings have been eliminated and their strengths have been enhanced, hovercrafts can be said to hold a special role in transportation.