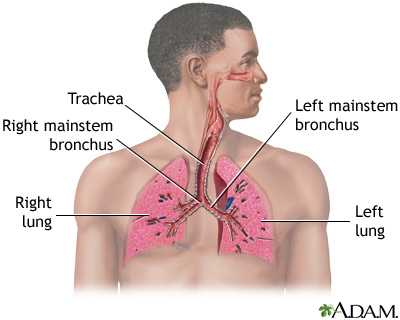 The lung is one of our vital organs that allows us to breathe and thus survive. Because of its structure, the lung, one of the three most important organs in the human body, is very sensitive and interesting. Our lungs are made up of two distinct lobes on the left and two distinct lobes on the right. It has a total of five distinct lobes. Millions of air bubbles are contained in these lobes, allowing us to breathe.
The formation of the lungs from five separate parts is also a divine secret. Because lung diseases spread rapidly and completely affect the area. Perhaps this is why the lung, which lacks the ability to regenerate itself when a part is removed, is made up of five distinct lobes. Furthermore, even if the lung does not regenerate, a person can live a normal life with only one lobe. Of course, the quality of life will be significantly lower than that of a person with a full lung. It should, however, be evaluated in terms of survival. Let us now look at the diseases that cause lung damage. Diseases such as edema, cysts, tuberculosis, bronchitis, and asthma, particularly lung tumors, cause serious lung deformations. These diseases can progress to much more advanced stages and even death, depending on whether they are treated with drugs or surgical intervention. Although lung diseases are extremely dangerous, they are not always detected right away. As a result, the patient’s history is consulted during diagnosis and treatment in a cause-effect relationship. Shortness of breath, for example, is caused by edema in the lungs as a result of a fall. Small patient stories are the reason for guiding the doctor and speeding up diagnosis. Let us now look at the causes of lung disease.
Factors that cause lung damage

– A sudden fall, beating, or accident on the rib cage – Serious inflammatory diseases such as tuberculosis and pneumonia
– Inflammatory vesicles and edema in the lungs during high fever – The body throws a clot in the lung in the event of paralysis
– Scoliosis of high grade – Obesity and overweight
– Animal cyst (hisditatic cyst) caused by inadequate washing of food, animal saliva, or hair – Alcohol and cigarette use – Bad weather -Many chemical drugs or cleaning products also cause destruction

These are the most common causes of lung disease and injury. While others wreak havoc over time. Tumors, cysts, and edema spread quickly and have serious consequences for the lung. As a result, early treatment and diagnosis are critical. Despite the fact that lung diseases are commonly referred to as contagious, only tuberculosis is contagious. As a result, symptoms like tuberculosis and the onset of tuberculosis should be prioritized, and at the first sign of a symptom, tests should be performed and treatment should begin in a tuberculosis warfare hospital or a full-fledged hospital directly affiliated with the Ministry of Health. It should not be forgotten that as medicine advances, all lung diseases, including tuberculosis, are cured and eradicated. The only thing to be cautious of is a complete diagnosis of the disease and prompt treatment. Early treatment, as they say, saves lives. Let’s go.
What are the most common symptoms of lung diseases?

Symptoms of lung diseases include: – Difficulty lying on the sick side; – Difficulty, distress, and constriction in breathing; – An increase in the average number of breaths per minute; – A low blood count; – Extreme stinging and pain in the rib cage; and – Do not become overly tired.
– Inability to climb stairs – Gradually becoming unable to complete even simple tasks
– Frequent fevers and malaria – Extreme loss of appetite and rapid weight loss – Local redness and swelling of the skin – Blood inflammation – Nausea, vomiting, and weakness

Almost all lung diseases exhibit these symptoms. The most obvious and obvious one is stinging in the chest area, as well as excessive fatigue and difficulty breathing. These three reasons are critical. While it is at least as important as the other symptoms, because it is a common symptom in other diseases, it can sometimes cause confusion and incorrect treatment. However, if any of the reasons listed above coexist with these symptoms, the nearest health institution should be consulted, and necessary tests should be performed. It should be noted that lung diseases and deformation are both potentially fatal conditions. Lung diseases that require surgical intervention, such as cysts, tumors, and edema, can kill by completely covering the entire lung in as little as two months if not treated promptly. As a result, we understand our vital organ and evaluate it using a cause-effect relationship. If there is a disease, it is critical to eliminate all negatives as soon as possible as a treatment.
(Remain healthy)

Clay Mask: What is it?

It is crucial for women to maintain their beauty and take the best possible care of their skin. A good skin care regimen makes it possible to…

The vitamin-rich fruit apple contains some ingredients that indicate a person’s capacity to burn fat. This results in the person becoming healthier than they already are and…

What Does Dry Mouth Indicate?

Dry mouth is termed xerostomia in medical jargon. If there is not enough saliva secretion, dry mouth ensues. If this circumstance persists repeatedly, it gets worrisome. Saliva…

What Does the Aggressive Child Do?

Aggressive Child some youngsters behave differently than other children. He is more violent, likes to hit and push his friends and surroundings. It is quite tough to…

What is Lung Water Accumulation Disease? What are the signs and symptoms?

Fluid accumulation in the lungs is one of the most common lung diseases in modern societies. The disease of collecting water in the lungs, known in the…